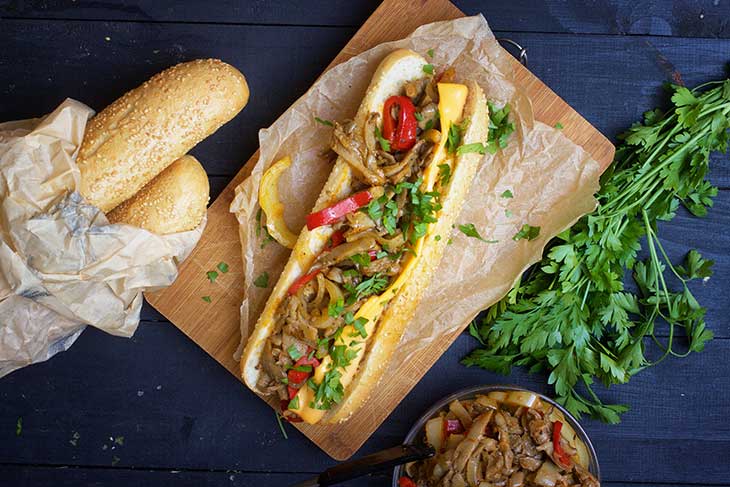 The steak sandwich is a classic snack that is enjoyed all over the world. It originated in the United States and it is believed that the first-ever steak sandwich sold was in New Haven, Connecticut at Louis’ Lunch.

Today, there are many takes on this snack. A lot of people enjoy it for lunch, and you will find plenty of great easy lunch ideas from Feasting at Home if you are in need of some more inspiration. After all, it can be difficult to think of new and exciting dishes to have for lunch every day, so it is always good to get some inspiration.

Chefs use a variation of meat when it comes to the steak sandwich – from prime rib eye to wagyu beef. From grilling to frying, the preparation differs, as do the toppings. In this post, I am going to take a look at some of the most well-known types of steak sandwiches so that you can get some inspiration for your own. So, let’s take a look:

French Dip – This sandwich consists of thinly sliced roast beef on either a baguette or a French roll. It served hot and au jus, meaning with the beef juice from the cooking process. The name of this sandwich often leads people to assume that it originates in France, but it is actually virtually unknown there. LA is credited with creating this sandwich, which can be found all over the US and Canada.

Steak and Cheese – This sandwich is one of the most loved foods of Philadelphia, often being referred to as Philly Cheesesteak. It consists of thinly sliced steak that is served with melted cheese in a long roll, yet there are variations of this snack found all over the world, with different cheese used and a whole host of additional toppings, such as peppers and onions.

Steak Bomb – This is a hot submarine sandwich, which consists of shaved steak, peppered shaved steak, either melted mozzarella or provolone cheese, mushrooms, sautéed green and red bell peppers, and grilled onions. As you can see, there is certainly a lot going on, and some places add even more ingredients to their Steak Bomb, including pickles and salami.

Roast Beef – Lastly, we have Roast Beef sandwiches, which have been a specialty in Boston since the early 1950s. This sandwich consists of sliced roast beef, which is typically served on a hamburger bun and may be topped with melted American cheese and / or barbecue sauce. The original version was served on an onion roll, with some people opting for horseradish sauce instead of barbecue.

So now you know a little bit more about some of the most famous and popular steak sandwiches. Satisfying and full of flavour, this dish has proved to be one of the most popular snacks around the world, especially in the United States. Do you have your own take on the classic steak sandwich? We would love to hear it!

Mine would be the Vegan Philly Cheesesteak !

Photo Credit
Here’s how to make a vegan Philly Cheesesteak sandwich, inspired by the legendary American sandwich! It’s just as delicious as the authentic recipe, but healthier!
Ingredients

For the vegan steak: