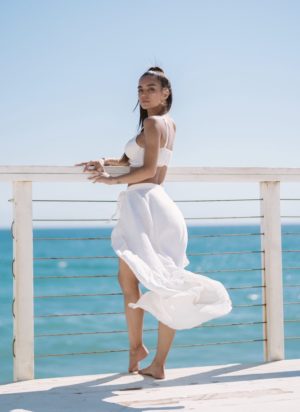 You may have seen her on many fashion related social media pages, or her interviews with magazines like Junnnktank, Kaboom and Pop Culture Spin, but she is much more than just a model. This babe wears many hats, among the modeling she also acts and she’s funny too! You can see her short comedy skits with actor Sam Jones III on Youtube (his YouTube channel as well as hers). When she’s had enough camera time she spends it designing her clothing line Black Rabbit Babe Activewear and Swimwear, and if that’s not enough you may catch her in the studio making  music.

So why BLACKRABBITBABE?
Her nickname became Black Rabbit as a inside joke, she explains that most of her life she felt like a “black sheep” given her small frame and strong features “black rabbit” seemed more appropriate. The nickname stuck and began to grow into a brand of its own. BLACKRABBITBABE has now morphed into a brand that showcases beauty and strength in women. To be proud of your unique individuality. #girlpower

“I want to help people, at the end of the day I create all of these things for you guys. I believe everyone is meant to live a beautiful fulfilled life, we are such magical powerful beings and when you can bring together such amazing energies it’s an incredible feeling. I just want to remind every single one how beautiful they are.” – Deserae Rose